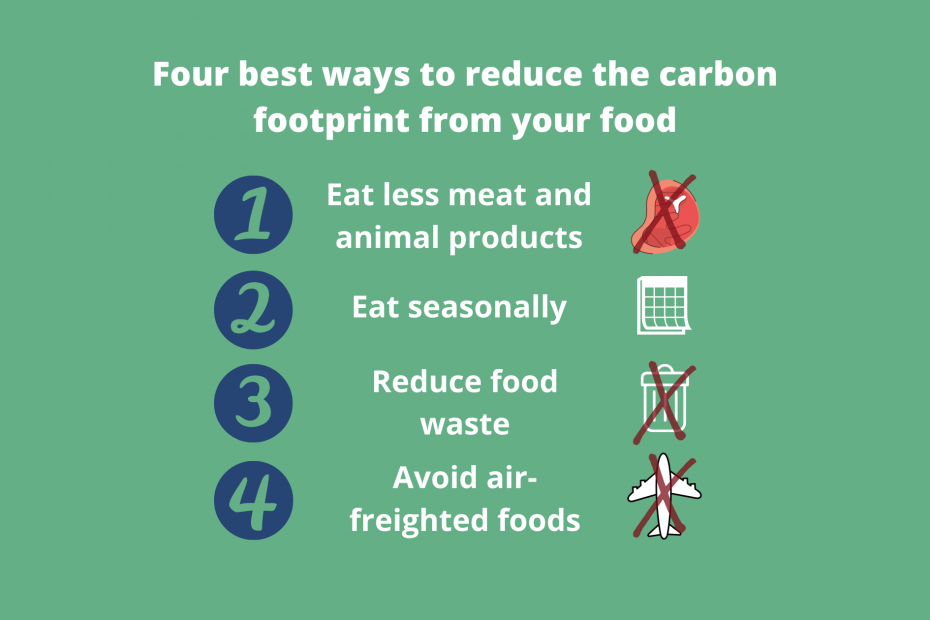 How to reduce the carbon footprint from your food

Food is responsible for about one-quarter (25%) of greenhouse gas emissions each year. Therefore, one of the best ways to help limit global warming and help tackle the climate emergency is to reduce the carbon footprint from your food.

Some foods have much higher emissions than others, even if you try to do everything to reduce their impact. Avoiding these foods as much as possible is therefore a great way to reduce the climate impact of your diet.

The majority of food emissions come from land-use change and farming processes, rather than from transport, packaging, and other stages of the food’s life-cycle. It is these stages, well before the food reaches your plate, that explains why foods have such different average carbon footprints. This is why Hannah Ritchie, senior researcher at Our World in Data, concludes that to reduce your carbon footprint it’s more important to think about what you eat, rather than eating local.

This is a graph of the average emissions of commonly eaten foods taken from the My Emissions database. These values incorporate emissions from the food’s entire life cycle, including farming, processing, packaging, and transport. 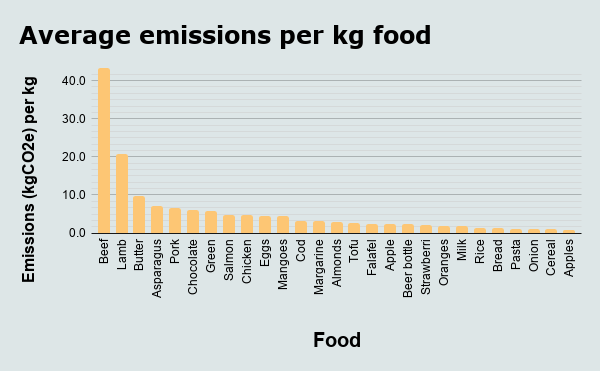 The table shows the range of emissions between different foods, and below are foods with the highest emissions. Reducing your consumption of these foods is the best way to reduce your carbon footprint from food, helping the world’s response to the climate emergency.

Beef is by far the most polluting food you can eat. The majority of the emissions are from the methane released by cows during their lifetime. On average, 1kg of beef contributes 4 times more greenhouse gas emissions than almost every other food. Similarly, one small serving of beef (125g) equates to 5.42kg CO2e, which is about 178% of your recommended daily food emissions.

To put this in perspective, a new car in the UK emits on average 0.1245kg CO2e/km. This means that one small serving of beef contributes the same greenhouse gas emissions as driving a new car 43.5km!

A second trend from the results is that emissions from meat products, including dairy, are much higher than other foods. Whilst beef and lamb have higher emissions than chicken and pork, those products still have higher-than-average emissions.

Dairy products predominantly come from beef, and it makes sense they also have higher-than-average emissions. Butter, for example, has higher emissions than common meats like chicken and pork. Replacing butter with a plant-based alternative such as margarine on average reduces your emissions by one third. Milk has lower emissions per kg, although its emissions are still more than double non-dairy alternatives, such as soy milk.

Comparing meats with meat-alternatives also demonstrate that meats produce much greater emissions. For example, the emissions from chicken and eggs (two of the lower-emitting meat products) are still twice as high as common meat alternatives falafel and tofu. Grains and legumes, including different peas, and vegetables all also have much lower emissions.

All of this shows that reducing your consumption of meat and animal products is the best way to reduce your carbon footprint from food.

Eating foods that are in season greatly reduces the carbon impact of those foods. When we think about it, this makes sense. Growing foods out-of-season requires artificially creating the right environments. This uses more energy, which inevitably increases the overall emissions of the food.

Eating seasonally to reduce emissions might include favouring imported goods grown in-season rather than out-of-season local foods. Researchers in 2013 looking at the Austrian market concluded that eating only seasonally produced tomatoes reduced emissions by more than 85%, even taking into account that for most of the year that meant importing tomatoes from abroad. Similarly and more recently, Sean Beer, a senior lecturer in Agriculture at Bournemouth University, argues in favour of sticking to a seasonal diet to improve your sustainability.

As the latter article explains, there are other benefits to eating seasonally, including a better connection to our natural environment. This is therefore a great way to reduce your carbon footprint from your diet.

It is estimated that a whopping 25% of all food is wasted. That’s equal to 6% of global greenhouse gas emissions and significantly more than the total emissions from the aviation industry! Moreover, the majority of this food waste is coming from people’s homes.

One of the simplest things we can all do to reduce our carbon footprint is to reduce food waste. There are many ways to do this, including planning your meals so you don’t buy more than you need, making sure food is stored properly, not throwing away food just because it’s past its ‘best before’ date (look and smell it to see if the food is actually off), and more. You can find more tips on this here.

We previously suggested that eating local doesn’t necessarily reduce your emissions. Nevertheless, it certainly is important to try and avoid foods that have been transported by air.

The majority of food is transported by road or sea. For example, according to a 2015 report, less than 1% of food is flown to the UK. However, emissions from air-freighting are much higher than road and sea transportation. The same 2015 report found that those air-freighted goods nevertheless accounted for 12% of food transport emissions. Similarly, researchers last year concluded that the “impacts of air-freighted fresh vegetables are around five times higher than of those produced domestically.”

Foods that have been air-freighted contribute more emissions and to global warming. Our third recommendation for reducing the carbon footprint of your diet is therefore to avoid air-freighted food.

There’s one difficulty with this recommendation: food labels don’t currently tell you when a product has been flown, making it hard to spot air-freighted foods. We sadly can’t provide a list of all air-freighted foods, but can help you to spot commonly flown foods. Hannah Ritchie, for example, provides the following useful guidance:

“A general rule is to avoid foods that have a very short shelf-life and have traveled a long way (many labels have the country of ‘origin’ which helps with this). This is especially true for foods where there is a strong emphasis on ‘freshness’: for these products, transport speed is a priority.”

It is crucial we all move to a more sustainable lifestyle in order to tackle global warming. However, maintaining a sustainable diet isn’t easy, and requires you to think carefully about everything you eat. This can be made more difficult by the lack of accessible information on food emissions.

We developed this guide to help you to reduce your carbon footprint from food. Our three recommendations are simple changes everyone can make to reduce their contribution to greenhouse gas emissions. If everyone started to think about their diet and made reductions, together we can help to mitigate the worst impacts of climate change.

Our daily food emissions calculator helps you to understand and reduce the carbon footprint of your food. Why not start now by putting in the food you’ve eaten today?